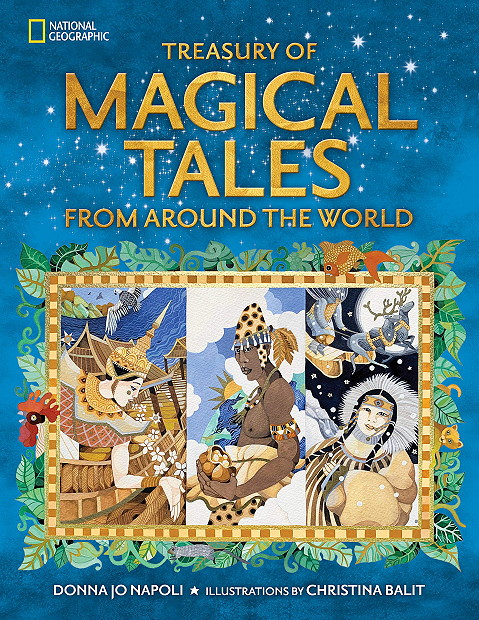 A flower-spouting princess, gobbling prince, emerald-winged fairy, foolish giants, fearsome ogres, and talking frog and fish are just a few of the captivating characters found in this anthology of beloved stories from 29 places around the world, from the Arctic to Africa to Asia to Australia to Europe to the Americas.
Meet a sailor with an ogre wife in a story from China, a young girl who outsmarts giants in a tale from Fiji, a clever rooster seeking its fortune in a tale from Morocco, a music-playing jaguar in a story from Ecuador, and princes turned to statues in a story from Italy.
Donna Jo Napoli’s powerful storytelling makes these stories fresh and fun, and Christina Balit’s dazzling illustrations make this book a true treasure—a very special gift and a must-have for family bookshelves.

You can purchase Treasury of Magical Tales From Around the World at the following Retailers:

Praise for Treasury of Magical Tales 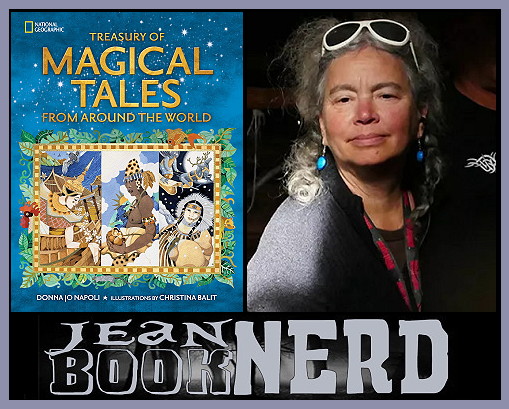 Photo Content from Donna Jo Napoli
DONNA JO NAPOLI is a professor of linguistics and social justice at Swarthmore College, mother of five, grandmother of two, and the author of more than 80 books for children and young adults. While her undergraduate major was mathematics and her graduate work was in linguistics, Napoli has a profound love of mythology, folklore, and fairy tales. Her books have won the Golden Kite, Sydney Taylor, Parents’ Choice Gold, and many other national and state awards, and have been translated into 19 languages. She lives in Swarthmore, Pennsylvania.
CHRISTINA BALIT is a graduate of the Chelsea School of Art and the Royal College of Art, London. An award-winning dramatist and illustrator, she has illustrated over 20 children’s books, including the following titles for National Geographic: Zoo in the Sky, Once Upon a Starry Night, Treasury of Greek Mythology, Treasury of Egyptian Mythology, Treasury of Norse Mythology, Treasury of Bible Stories, and Tales From the Arabian Nights. Balit’s author titles include Escape From Pompeii, Atlantis: The Legend of the Lost City, and An Arabian Home. Her plays include Woman With Upturned Skirt, The Sentence, and Needle (winner of the Brave New Role award). She lives in England.

*JBN is not responsible for Lost or Damaged Books in your Nerdy Mail Box*
//d12vno17mo87cx.cloudfront.net/embed/rafl/cptr.js
a Rafflecopter giveaway https://widget-prime.rafflecopter.com/launch.js
Rafflecopter