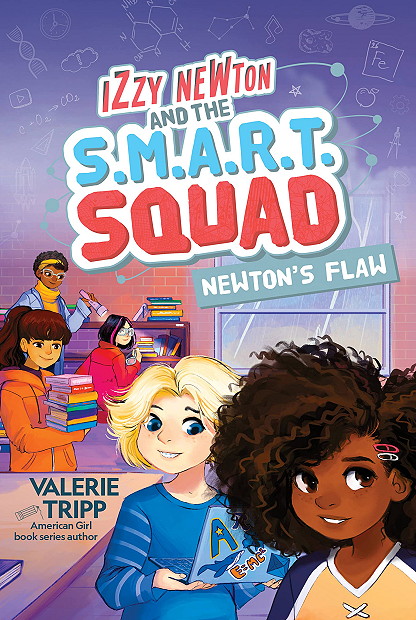 With their first mystery solved and first-day jitters triumphantly behind them, Izzy and her pals—the Solving Mysteries and Revealing Truths Squad—start to settle in to the normal day-to-day at Atom Middle School. Izzy even works up the courage to try out for an all-boys sports team! Things are going well until a mysterious illness threatens to shut down the media center—and maybe the entire school. The S.M.A.R.T. Squad is on the case in a race to figure out what ails them. But that’s not all. A pop-up science fair causes excitement and tension for the Squad. And Izzy’s failure to speak up in her speech class feels like an obstacle she can’t overcome. Can the girls pull together to solve the media center mystery? Will their STEM smarts help them rock the science fair? Or will Izzy Newton’s flaws mean the end of the S.M.A.R.T. Squad?

Plus, learn more about the real science behind the fiction and meet some amazing real-life scientists.

And don’t forget to check out the first book in the series, Izzy Newton and S.M.A.R.T. Squad: Absolute Hero.

You can purchase Izzy Newton and the S.M.A.R.T. Squad: Newton’s Flaw at the following Retailers:

Praise for IZZY NEWTON AND THE S.M.A.R.T. SQUAD: ABSOLUTE HERO
This series opener highlights diverse, sympathetic characters using their smarts and their emotional intelligence to solve scientific and social challenges. Charlie has light-brown skin and speaks Spanish with her two moms, Allie presents white, Marie presents Asian, and new girl Gina Carver is black; Izzy is a winning black protagonist who steadily challenges herself and nurtures her friendships. Bowers’ half- and full-page grayscale illustrations add personality to the characters. Backmatter offers further information on the characters’ real-life inspirations and women scientists. Wholesome entertainment for preteens, offering positivity without didacticism. ―Kirkus

Written by girl-power expert Valerie Tripp—the author behind some of your favorite American Girl stories—the Izzy Newton and the S.M.A.R.T. Squad series features five brainy friends inspired by iconic scientists—Izzy Newton, Allie Einstein, Charlie Darwin, Marie Curie, and Gina Carver—as they go through the wild time that is middle school, with stories on friendship, growing up, and of course, solving mishaps with science and the scientific method. … It’s one thing to have children’s books about scientists or podcasts or stories about strong women in STEM, but it’s another world entirely when your children get to feel represented by the characters they’re reading about. The characters in the Izzy Newton and the S.M.A.R.T. Squad series are diverse, smart, and sure of themselves the way all middle school girls are—through their dreams and newly acquired skills they’re still getting used to. ―Romper 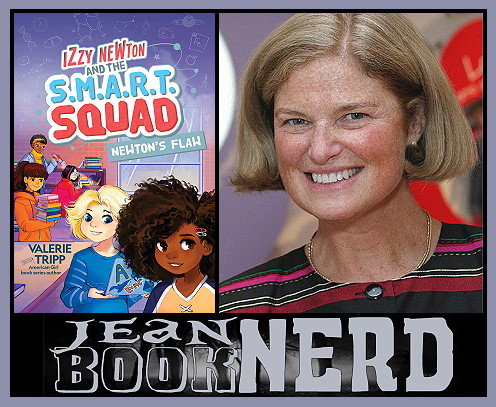 Photo Content from Valerie Tripp
Part of the creative team behind the American Girl series, Valerie Tripp has written many of the American Girl books about Felicity, Josefina, Samantha, Kit, Molly, and Maryellen. She also wrote American Girl’s Welliewisher and Hopscotch Hill School books. Tripp has also written numerous levled readers, songs, stories, skills book pages, poems, and plays for educational publishers and is the editorial director of the Boys Camp series. She is a frequent speaker at schools and libraries.

*JBN is not responsible for Lost or Damaged Books in your Nerdy Mail Box*
//d12vno17mo87cx.cloudfront.net/embed/rafl/cptr.js
a Rafflecopter giveaway https://widget-prime.rafflecopter.com/launch.js
Rafflecopter