In the year 1398 A.D., Lady Goharshad and her husband, King Shahrokh, come across an ancient manuscript in the ruins of Karakorum, the Mongol capital. The manuscript chronicles the era of Mongol invasions with entries by three princesses from China, Persia, and Poland who are captured and brought to the Mongol court.

After being stolen from her family at the Tangut Emperor’s coronation, Princess Chaka, the Emperor’s youngest daughter is left with no choice but to marry Genghis Khan. Thus, the Tangut join Genghis as allies. She is the first to secretly chronicle the historical events of her time, and in doing so she has the help of an African eunuch by the name of Baako who brings her news from the war front.

Princess Reyhan is the witty granddaughter of the last Seljuk King in Persia. She is kidnapped by Ogodei, Genghis’s son and heir, who falls in love with her. The romance does not last long, however, since a Mongol beauty wins Ogodei’s heart, and Reyhan is sidelined. Reyhan continues the tradition of recording the events in secret, turning her entries into tales.

During the Mongol invasion of Poland and Hungary, Princess Krisztina, niece to Henry the Pious, is taken as a prisoner of war by the Mongols. Reyhan learns about Krisztina’s predicament through Baako and asks Hulagu, Genghis’s grandson, to help free her. Krisztina has a difficult time adjusting to life in Mongolia, and at one point she attempts to run away but is unsuccessful. When the child she is bearing is stillborn, the Mongol court shuns her. She is able to return to her homeland in old age but comes back to Karakorum and writes her final entry in the journal.

Through beautiful language and powerful storytelling, this fact-based historical novel lays bare the once far-reaching and uncompromising Mongol empire. It shows readers the hidden perspectives of the captive, conquered, and voiceless. It brings to light the tremendous but forgotten influence of Genghis Khan and his progeny, while asking readers to reconsider the destruction and suffering of the past on which the future is built.

Praise for The Sky Worshippers

“The author’s in-depth research is evident throughout The Sky Worshippers. For readers who enjoy a lush blend of historical fact and fiction, this novel details the smells, sights, sounds of a pivotal era in time, uniquely told through the eyes of three captive princesses.”†- Gina Wilkinson author of When the Apricots Bloom

“F.M. Deemyad immerses the reader into the 13th Century world of Genghis Khan. It’s an unforgettable story of survival and strong women as we experience life through the eyes of the conquered-and the conquerors. In The Sky Worshipers, history comes vividly alive.”†- John DeDakis, Novelist, Writing Coach, and former Senior Copy Editor for CNN’s “The Situation Room with Wolf Blitzer”, http://www.JohnDeDakis.com

“In this stunning saga, F. M. Deemyad takes us on a thrilling journey as Genghis Khan and his sons sweep across Asia and Europe, worshiping the sky while they conquer one nation after another and capture women to enslave and marry. The women’s stories, rich with architectural, historical and cultural detail, hold an important message for all of us who have inherited privileges as the result of our ancestor’s atrocities. A great read and a phenomenal debut!”†- Raima Larter, Author of Fearless and Belle o’ the Waters

“The Sky Worshipers by F.M. Deemyad draws us into Genghis Khan’s conquests through the eyes of three women ripped from their homes and thrust into royal service. This lyrical novel is a vivid imagining of hearts and minds of women who left their marks on history, despite history’s failure to acknowledge their contributions. It allows us to connect with timeless striving for a world of compassion, equal opportunity, and celebration of diversity. A beautiful novel.”†- Lisa L. Leibow, J.D., Co-Founder, Board President, Chief Operating Officer, The Scheherazade Project

“An illuminating telling of Mongol conquest and the people who lived-and died-making decisions that shaped half the world. The broad strokes of time are revealed through the perspectives of single bristles of the brush. Cleverly imagined and carefully rendered, The Sky Worshipers is an engaging, personal look at one of history’s momentous eras.”†- Zach Powers, author of First Cosmic Velocity

This was such an interesting and historical driven story. I’ve always found myself easily lured into stories that chronicle this time in history and this one was no different. And even without the history the story on its own is amazing and beautifully told.

You know, I’m always a sucker for a good female driven historical fiction. And The Sky Worshippers takes it a step further and covers a time that is rarely talked about in books (well, at least from a woman’s perspective). And the story in itself is just really amazing and engaging. There is a wide time period covered, but you don’t feel as if anything is lacking. The storytelling is beautiful and you really get drawn into the story. Well, not only the story but also the time period as the things you learned in history come to life.

I really enjoyed this one and hope to see more from Deemyad in the future. This was a beautifully written historical fiction and I found myself not wanting to put it down. Plus, like I said, it was a wonderfully woman centric story in a time period where women were easily forgotten. 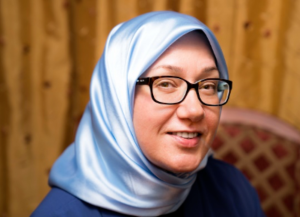 F.M. Deemyad was born in Kermanshah, Iran. She grew up in the capital, Tehran, attending bilingual schools run by Christian and Jewish minorities. Her father, born and raised in India, had come to Iran when he was in his late twenties. Being the son of a linguist who had taught English Literature in India for a number of years, he exposed the author in her preschool years to the English language, and she learned to love classic literature under her fatherís instructions. She received her Masterís degree in Writing from Johns Hopkins University in 2016. She currently resides with her husband in Maryland.

Tuesday, March 9
Review at @the.b00kreader
Review at With A Book In Our Hands

Monday, March 15
Review at Books and Zebras
Review at Historical Fiction with Spirit

Tuesday, March 16
Feature at Reading is My Remedy

Enter to win a copy of The Sky Worshipers! Two copies are up for grabs!

The giveaway is open to the US only and ends on March 17th. You must be 18 or older to enter.