May Sage & Alexi Blake will be revealing art from The Cursed Crown every month leading up to the December 1st release! Today’s art comes from Salome Totladze! Check it and an exciting new excerpt out now! 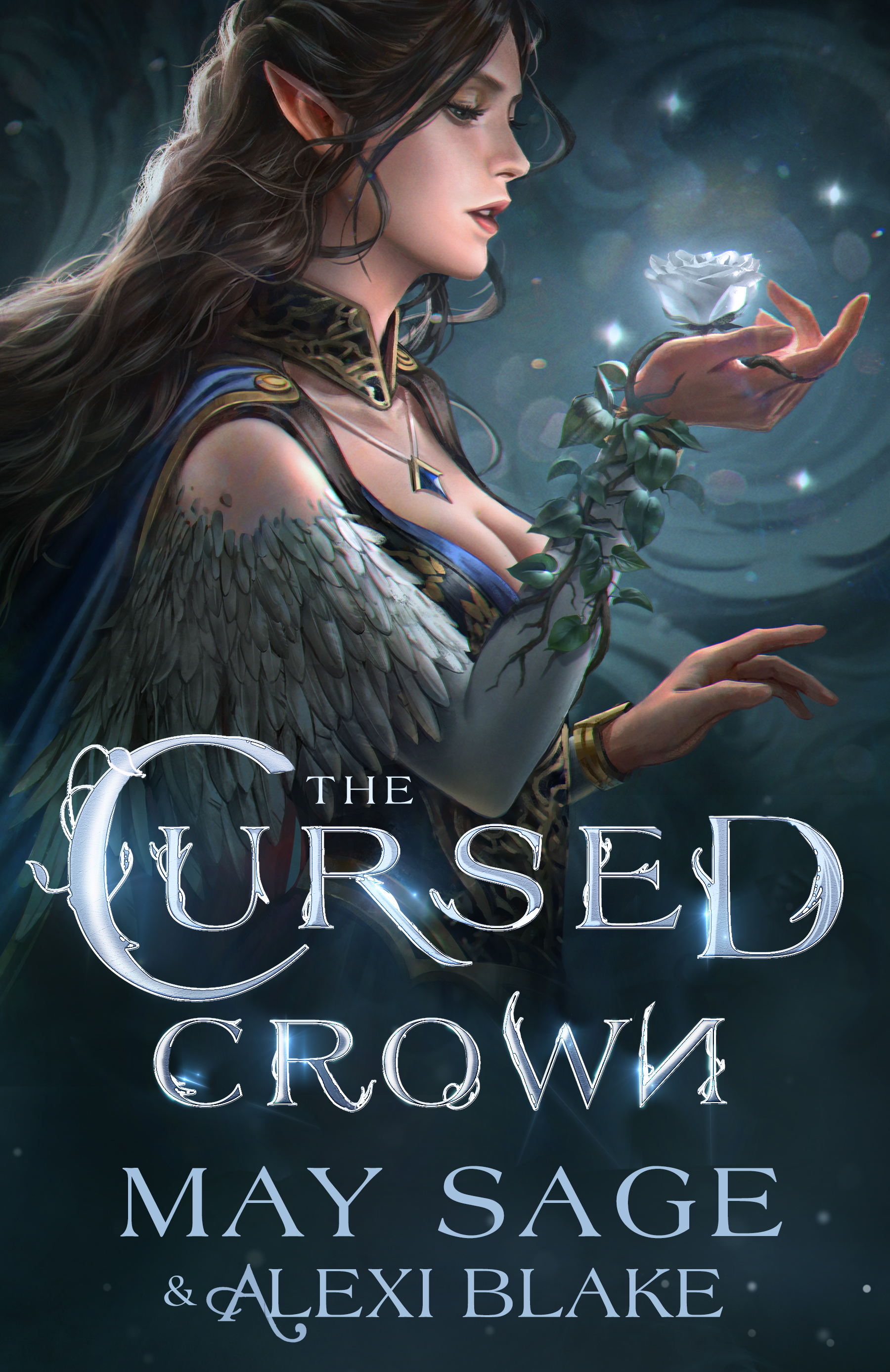 Typography by Sylvia Frost from The Book Brander Boutique

About The Cursed Crown:

My lips hitch up an inch as the hulking, slender man bends down to whisper in my ear. “A divided kingdom without a leader is weak. You will fall. You will fail. You will all die without my kindness, little girl.” He expects me to falter, shiver, and drop my gaze to the ground like the flock of gentry buzzing around him. My eyes widen in feigned dismay. “Kindness? Why did no one think to tell me you had any?” I have to allow him that one concession: Rydekar is fun to tease. He doesn’t even smile. I don’t think anyone has taunted him. “I have none. You will beg nonetheless.” I just may, in his dreams. And in my nightmares. No one was ever born less suited to ruling than Rissa, the thorn of the seelie realm—a half-fae so wild she’s spent the better part of a hundred years in the woods. For all her flaws, she’s the last of the high court bloodline, and the southern king seems to think that’s reason enough to slap a crown on her feathered head. He needs her to unify the seelie forces. She needs him to forget about that nonsense. In an effort to aid her people without condemning herself to a lifetime of misery, she sets off on a journey to find the one person with a stronger claim to the throne than hers: the cursed prince. Sealed in the mountains of the Wilderness, under many spells, the heir of the first seelie queen is the only royal strong enough to protect the fae lands from their immortal invaders. Surviving the untamed tribes and awakening a thousand-year-old prince seem a lot easier than ruling an entire kingdom where everyone hates her very nature. And her choices won’t come without consequences.

Long have I heard tales of the cursed prince. I’ve seen dozens of paintings and statues of his effigy. None prepared me for him. Tharsen is said to be beautiful, when he is exquisite. They tell us of his luminous aura, when it’s brighter than that of a burning star. He is beyond gods and monsters, beyond fae and man. I’ve never felt so strong a draw to anyone—anyone at all. It’s blinding and painful, claiming a piece of me. Capturing my mind. We’re kin, he and I. I am the daughter of his brother’s great-great-great-great-grandchild, I think. Yet I feel like I am an insignificant sparrow and he, the fiercest of the beasts soaring the sky. Barely the same species. He’s everything I’m not. The dream to my nightmare. One only needs to look at him to fall under his spell. Yes, he’ll do. He’ll rule all of Denarhelm, and all will be only too pleased to bow at his feet. They’ll crawl to him and beg to be permitted to serve. I can’t deny that the thought terrifies me. This creature could bring an end to the free will of the folk, with no more than a glance. I dare to caress the icy wall encasing him. Then I step back, startled. It feels… Alive. His pulse beating so hard I can sense it through the ice. That shouldn’t be possible, but I left the realm of possibility the moment I entered his eternal prison. He’s a myth come alive. A painfully striking prince under a curse. I suppose that makes me the hero of the story. The brave princess who rescues him, so that he may rule and I may return to the shadows, where I belong. My story ends where his begins. I will return to the solitary woods I’ve claimed as my own, and let the kings of the world play games of war. Just as I wanted. Everything is within my grasp. So why am I hesitating?

Stay up to date on teasers and teasers with The Curse Crown Facebook Group!

May Sage is a USA Today Bestselling romance writer dabbling in different genres, although the readers who follow every series know they’re all related. When she isn’t writing, she spends her time with her German Shepherd, her two Savannahs, and her black rescue cat, in England. She loves reading, ballet, running, and cake. Mostly, cake. Follow her on Facebook or join her newsletter for the latest update.

Connect with May Sage: